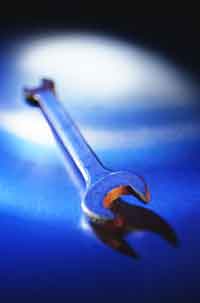 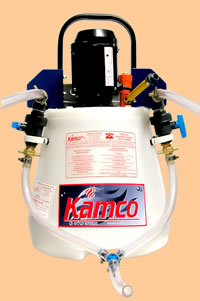 What is Power Flushing and why is it needed?

'POWER FLUSHING', 'JET FLUSHING' & 'HARD FLUSHING' are all expressions used (in the heating trade over many years) to denote the process by which heating systems are forcibly cleansed using water at high velocity but low pressure, so that no physical damage is caused to the system. The process can be made even more effective with the addition of powerful cleansing and mobilising agents such as FX2 and HYPER-FLUSH, from Kamco™.

The objective is to restore systems with circulation and boiler noise problems (caused by sludge and corrosion deposits) to optimum operation. Power flushing removes these deposits and the problems that they cause. Click here to see a working diagram of the symptoms which indicate that Power Flushing would be beneficial.

Power flushing, in conjunction with a SYSTEM PRE-CLEAN, is also an excellent way to pre-commission clean new heating systems, to remove excess flux, swarf and other debris, and the grease and oil used to prevent rusting of components before use.

It is prudent to power flush a heating system immediately before fitting a new boiler to an existing system to prevent possible future problems. Many systems are found to contain corrosion and sludge, even if no flow problems have yet shown themselves.

Existing debris is often mobilised by alterations to the system/piping and the increased efficiency of the new boiler, and may then accumulate in the boiler heat exchanger, causing noisy operation, reduced efficiency and, in extreme circumstances, failure of the boiler. The high efficiency and compactness of modern boilers, developed to minimise fuel costs and pollution, means that they are more susceptible to problems caused by debris in the system water.

How does it work?

The CLEARFLOW® power flushing pump is simply connected into the heating system, either across standard circulator pump couplings, across the tails of one radiator, or wherever most practicable. The powerful flow, combined with instantaneous flow reverser device, will dislodge and mobilise deposits and corrosion which resist traditional system cleaning methods. Once the corrosion and sludge deposits have been loosened and mobilised, fresh clean water is forced through the heating system, pushing the contaminated water out through a full bore dump valve to waste. During the CLEARFLOW® process, radiators are individually flushed, without removing or disconnecting them from the system, by directing the full output of the pump through each radiator separately. At the end of the flushing process, the system contains fresh clean water and reinstatement of the system to normal operation takes only a few minutes. System flushing will not remedy design or mechanical faults, which should be rectified, but in many cases it will cure the problems caused by these.

After the system has been power flushed, the clean water in the heating system will need treating with SYSTEMSAFE DM. This will help to protect the system from further corrosion and scale build up.